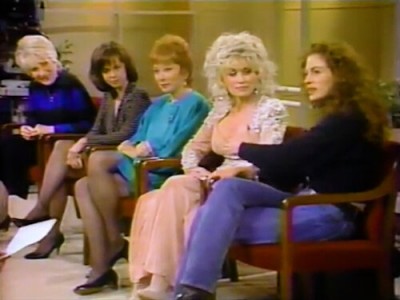 I’m so glad this video popped up on YouTube last night as a recommendation.

Not sure if I’ve shared this publicly (probably have!) but during the painful unraveling of a relationship in the early 90s, I watched two movies over and over for several weeks because, I think, I couldn’t handle any more uncertainty. I had to know the ending of something.

Those movies were Postcards From the Edge and Steel Magnolias.

But I had never before seen this episode of Donahue where cast members Sally Field, Dolly Parton, Shirley MacLaine, Olympia Dukakis, and Julia Roberts appeared to promote their film.
Oscar winners and a multi-Grammy winner, Roberts was the newbie and not yet very famous.

That would change with this movie as she won the Golden Globe and was the only cast member to be nominated for an Oscar. Next came Pretty Woman and another Oscar nomination then superstardom. She would eventually win an Oscar of her own in 2001 for Erin Brockovich.