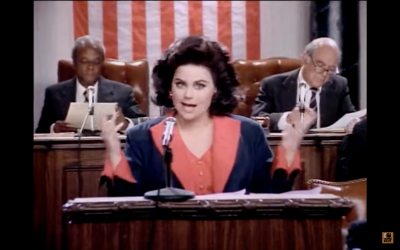 One off my favorite sitcom characters of all time is the self-absorbed beauty queen with a heart of gold Suzanne Sugarbaker who Delta Burke played to perfection for the first five seasons of Designing Women. She earned two best lead actress in a comedy series Emmy nominations for her delicious performances.

But Miss Burke clashed with series creator Linda Bloodworth-Thomason and a once very happy sitcom family fractured during the show’s fourth season. Delta was fired after season five and the show limped along creatively for two more seasons without her and without the brilliant Jean Smart. It wasn’t the same even with the considerable talents of Dixie Carter and Annie Potts leading the way and replacements including Jan Hooks, Judith Ivey and Julia Duffy.

Two years after Designing Women ended, Bloodworth-Thomason and Burke had made up and collaborated on the Designing Women spinoff Women of the House. In it, Suzanne takes over her late husband’s Congressional seat and her staff includes characters played by Patricia Heaton, Teri Garr, Valerie Mahaffey, and Julie Hagerty, among others. As you would expect, Heaton and Garr are terrific and you wonder what could have been had the show lasted longer than 13 episodes in 1995. Hagerty took over for Mahaffey after just a handful of episodes which was a pity because Mahaffey was perfect for the part. Not sure what happened.

I had seen a few episodes but it wasn’t until a few days ago that they popped up on YouTube that I had a bit of a binge starting from the first episode. It made me appreciate it more than I had and to really delight in the vintage Suzanne Sugarbaker moments like when she breaks the bed in the Lincoln Bedroom during a stay at The White House.