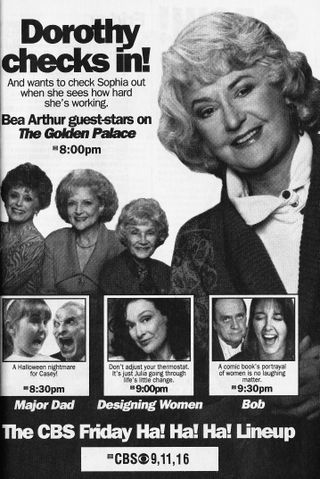 Somehow, episodes of the 1992-93 series The Golden Palace was a spinoff of The Golden Girls and had the characters played by Betty White, Rue McClanahan, and Estelle Getty selling the house and buying a hotel in Miami.

The pilot was fine and I loved seeing the actresses as the beloved characters they played on the original series from 1985-92. Bea Arthur decided to leave the show while the others clearly wanted to go on.

But Miss Arthur did return for a two-part episode and suddenly the show was really good. It turns out she really was the glue that made it all work. The show lasted a full season on CBS but was not renewed.

These episodes, which I am posting in their entirety, mark the final appearance of Miss Arthur as Dorothy and the final time the Emmy-winning quartet would act together.

The episode also features an unknown Jack Black in a small role.