Dan Amboyer shares his Pride story: “Out to all at just 13. No kids like me. Difficult to imagine a future” 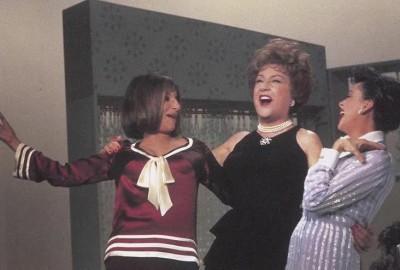 When I say they don’t make television like this anymore, they really don’t.

That’s because The Judy Garland Show, during its 1963-64 run on Sunday nights on CBS, brought about all kinds of once-in-a-lifetime television moments that, thank God, are preserved and now out on DVD.

Garland had starred in several highly-rated specials for CBS but her series ran for just 26 episodes. It was a hit with the critics but faced a ratings challenge from the popular western series Bonanza.

The series reached a real high point on Oct. 4, 1963 when Judy welcomed two showbiz legends on the same episode: Ethel Merman and Barbra Streisand. Merman was long the queen of Broadway with such hits as Gypsy and Annie Get Your Gun while Streisand had starred in I Can Get It For Wholesale on Broadway and was about to triumph in Funny Girl. She had not yet made a movie!

Here is some of Judy and Barbra and Ethel (Merman also guested again later in the season). Enjoy!

Dan Amboyer shares his Pride story: “Out to all at just 13. No kids like me. Difficult to imagine a future”