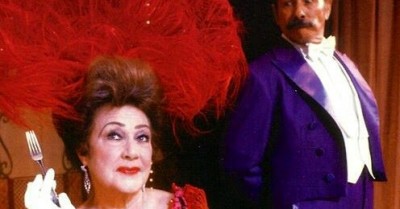 The late, great Ethel Merman was born on this day in 1908.

Her long list of Broadway triumphs span four decades and included Gypsy, Anything Goes, Call Me Madam, Annie Get Your Gun, Girl Crazy, Red, Hot, and Blue, and Happy Hunting, among many others.

Her final triumph on Broadway in a book musical was the nine months in 1970 she spent playing the title role in Hello, Dolly! She did 210 performances in the show and won the Drama Desk Award for best actress. The role was written specifically for Merman after her triumph in Gypsy but she turned it down to focus on movies and television. So Carol Channing got the part of a lifetime which made her a Broadway legend. When the show was about to end its six-years run (Pearl Bailey, Ginger Rogers, Martha Raye and others had stretches in the role after Channing left), Merman finally took the role on to rave reviews.

So today, I share with you some music and clips from that last star turn on Broadway for the great star who died in 1984 at the age of 76.