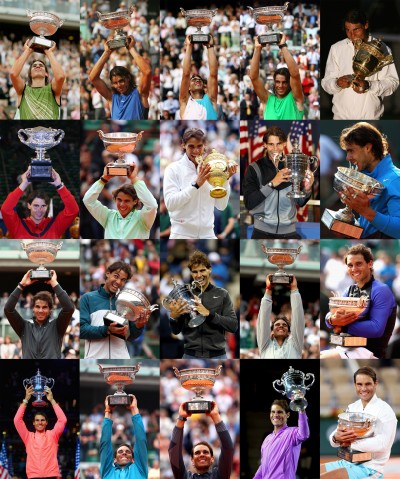 As a major Roger Federer fan, I thought I would be really upset if either Rafael Nadal or Novak Djokovic ever tied or surpassed Fed’s all-time record of 20 grand slam titles.

But it happened on Sunday when Rafa beat Novak to win his 13th French Open and 20th grand slam crown.

As I watched this video compilation of his 20 championship wins and celebrations, I could not help but be inspired and moved by his passion and amazing athletic ability.

He improved to 20-8 in Grand Slam finals. Broken down by Grand Slam that’s 1-4 in Australian Open finals, 13-0 in Roland Garros finals, 2-3 in Wimbledon finals and 4-1 in US Open finals. In most of his finals, he had to beat either Federer or Djokovic to win the trophy.

I’m quite certain men’s tennis will never again have such a all-time great trifecta almost completely dominating for so long. Federer’s slams range from 2003-18, Djokovic’s 2008-20, and Nadal’s 2005-20.

Will any of the big three add to their haul is 2021 or will one of the younger guns like Dominic Thiem, Alexander Zverev, or Stefano Tsitsipas prevail?