Patrick Stewart on his first gay role: “It was the loveliest experience. Liberating” 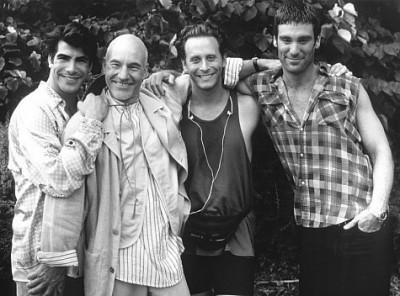 We all know that the wonderful actor Patrick Stewart has played several gay roles in recent decades but he will always have a special fondness for his first.

The year was 1994 and the film was Jeffrey about a young man (Steven Weber) in New York who besides to become celibate because he is terrified of AIDS.

I remember seeing the film at a theater in downtown Long Beach and being so depressed about AIDS but so enchanted with the movie and its characters.

Stewart was cast as an interior designer named Sterling who is determined to find Jeffrey a long-term relationship.

‘We had just wrapped the seventh and final season of Star Trek and I said to my agent, “Find me a job. I don’t care what i is but let it be as far removed from science fiction and outer space as possible!”‘ Stewart tells DNA magazine.

The actor at that point had become a science fiction icon through his role as Captain Jean-Luc Picard in Star Trek: The Next Generation. He would reprise the role in several feature films and video games.

Stewart’s agent quickly got back to him with the feature film adaptation of Paul Rudnick’s play Jeffrey.

‘I think that was my first time playing an openly gay character and I enjoyed it immensely,’ Stewart says. ‘Having led a life in the theater, I had been in the company of homosexual men and women from [the time I was] a teenager. It was familiar and completely normal.

The film also starred Bryan Batt of Mad Men fame as Sterling’s HIV-positive husband and Michael T. Weiss as the man who comes along and makes it very hard for Jeffrey to remain celibate.

‘When we were prepping for the movie, the production designer said he wanted to have lots of photographs around Sterling’s apartment — of them on holiday and with friends and so forth — so how would you feel if you and Bryan and Steve Weber go off and walk around the West Village. It was a Saturday afternoon during a hot summer, so without quite knowing exactly where he was with his camera we spent a couple of hours just hanging out and it was the loveliest experience. Liberating. And intimate. And fun.’