When it comes to a male actor deciding to come out of the closet, the conventional wisdom is that it will ruin his chances of ever being a big movie star – especially if he wants those coveted romantic leading men roles.

If the audience knows the guy is gay, apparently it will kill the fantasy and no one will want to buy tickets.

We hear it time and time again from the Hollywood power players and creative folks – both gay and straight – and we heard it again over the weekend at the Outfest Film Festival during a panel called Coming Out in Hollywood.

You wonder though, how do they know? Has it ever been tested? Have we ever had a major studio film flop because an openly gay actor had the romantic lead role?

I’d love to see , for example, what would have happened if the red-hot Neil Patrick Harris had the Tom Cruise role in Knight & Day. Might it have made more than the paltry $70 million it has taken in so far domestically?

We don’t know because it has never really been tried as far as I know.

But it’s hard to change things when an openly gay writer-director such as Don Roos (The Opposite of Sex, Bounce, Happy Endings) has issues with gays playing straight and vice-versa.

“I think the relationship between an audience and an actor is a very complicated thing, especially in a romantic lead,” Roos said during the panel discussion. “When you’re in a movie theater, what’s on the screen isn’t necessarily appealing to your best instincts. Most of the audience is going to be homophobic, they’re mostly violent in their hearts and that’s what they’re responding to on the screen and you can’t wait to have a career until the audience is not homophobic. That’s never going to happen. … In a romantic role, it can be very distracting for the audience to not be able to give themselves to a particular character. Like when I was watching Philadelphia — I knew [Tom Hanks] was straight.” Roos has directed such actors as Ben Affleck, Gwyneth Paltrow, Maggie Gyllenhaal, Tom Arnold, Lisa Kudrow, Christina Ricci, Lyle Lovett, Jason Ritter, Laura Dern and several other people who are quite well-known, not exactly blank slates in the minds of the public.

It makes me wonder if knowing that Affleck and Paltrow are straight was a distraction in Bounce.

“I think everybody should be out to their circle but it’s more difficult if you’re a romantic lead,” Roos said at the Outfest event. “It would be hard for me to cast Natalie Portman as a woman rancher because she’s this crazy vegan. I want to not have conversations about is he gay or is he not gay; I want to know as little as possible.”

I wanted to publicly ask Roos to expand on this topic but could not manage to get called on by the moderator.

So I talked to Don face-to-face after the panel and we started by talking about his problems with Hanks and his Oscar-winning performance as a gay man with AIDS fighting being fired from his job in 1993′s Philadelphia.

“I kept feeling distracted knowing that he wasn’t really gay,” Roos told me. “I was admiring him and thinking, ‘Oh my God, how well he’s playing that.’ The more I know about any actor about anything, the more distracting it is.”

“I’m just saying in general, the more I know about an actor and his personal life and his personal beliefs, the less useful it is to me as a director. Sometimes I’m distracted because I’m mad that it isn’t a gay actor playing that role. Whatever your political thing is, it interferes with the storytelling.”

More specifically, if an actor were gay in a straight role, he admits he might be similarly distracted. But then he said: “I saw Sean [Hayes] on Broadway [in Promises, Promises] and the only distraction was that I sometimes saw the character that he played on Will & Grace but I totally bought him as a straight guy.” 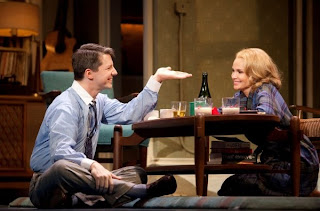 Now I was really confused and asked: “Would you cast an openly gay actor as a romantic lead in a straight role? Would you be the one to do it?”

Roos: “That’s hypothetical. It would really depend.”

Roos: “I would have to know what the part is.”

“Oh, I’m open to it, absolutely. What I’m talking about in a more general sense is only romantic leads. That’s a relationship they can have with the audience that it’s distracting whatever they know about you.”

He’s still got the romantic leading man block but, thankfully, he is not willing to make some kind of blanket rule about not casting gays as straight and straight as gay.

“As a director, as a casting person … if someone comes in and you fall in love with them, you don’t care anything about them … if they embody what your vision is, you go for them. … I think sometimes it’s a little hurdle for the audience but if I love the guy, I’m willing to take my chances. My films are all very counter-culture films anyway, it doesn’t really matter in my world.” Much more clear during the panel were the feelings of openly gay actor Jonathan Slavin (pictured, left) who most recently was a regular on the ABC sitcom Better off Ted. He thinks it is time for someone in a position of power to make the leap of casting a gay actor in a major movie lead.

“Don’t you think that there were people who said to Sidney Poitier that an audience is never going to accept a black man as the lead of a film?” he said during the panel. “At a certain point, you have to just cast (gay actors) and grab the reins and move forward and see what happens. It is about taking risks and taking risks and not waiting until it’s safe. We’re accommodating a narrow-minded mentality.”