My chat with MSNBC’s Thomas Roberts 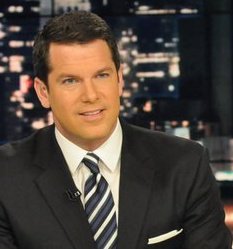 I met Thomas Roberts back in 2006 when he came out publicly to a roomful of fellow journalists at the National Lesbian and Gay Journalists Association convention in Miami.

He was an anchor with CNN Headline News then and I wanted to do a story on him for The Advocate for which I was then a contributing writer. It seemed like there was some resistance from above and we never did the interview.

But Thomas never bad-mouthed anyone and didn’t complain when he was transferred to a less visible timeslot on the network now known as HLN.

Thomas later moved to LA where he worked for a time as a correspondent for The Insider and did such things as host a TV version of The Advocate and red carpet interviews for the SAG Awards.

I’d see him from time to time at events and he was always so gracious and friendly. So I always found myself rooting for Thomas and hoped he’d get another high profile gig.

In late April 2010, Thomas began freelance anchoring for MSNBC and was named full-time anchor in December. He anchors the 11 am hour (eastern time) on weekdays and it has been just astounding to watch him masterfully handle interviews with various newsmakers with such intelligence and confidence.

Honestly, I had no idea he was that good.

Anyway, I chatted with Thomas about the MSNBC gig in an interview we did several months ago. You can read it over at Gay Star News.