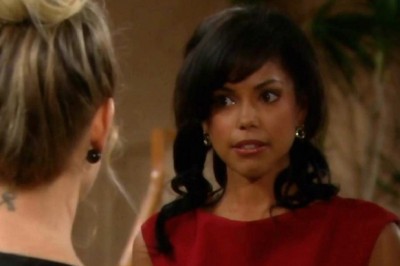 Emmy winning CBS daytime soap The Bold and the Beautiful revealed earlier today that one of its characters is transgender.

It was a twist that the most loyal of viewers did not see coming.

The big reveal came during a confrontation between sisters Maya (Karla Mosley) and Nicole (Reign Edwards).

‘You’re not my sister, Maya. You’re not Maya at all,’ Nicole said to her sibling. ‘You’re Myron, my brother.’

Maya is a model who’s dating Rick Forrester (Jacob Young) and transitioned from a male to a female at a young age.

Aweethart1963 tweeted: Am I reading this right? Maya was born with an……extra part? #BoldandBeautiful

@FutureSoBrite_ wrote: Seriously it takes guts for a major Soap Opera and a MAJOR Network (CBS) to go forth with this #BoldandBeautiful has no fear apparently.

Mosley took to Twitter herself to respond to the outpouring by tweeting: ‘Totally not supposed to be tweeting, but thanks for all the LOVE. So much more to come.’

The show’s executive producer and head writer Bradley Bell tells USA Today the story the soap is telling is about love and tolerance.

‘It is about people respecting other people’s differences and their uniqueness,’ he says. ‘In the end, we all want to be loved, and in order to love someone else you first have to love yourself. If you are transgender, gay, straight, it doesn’t matter. It’s about finding love in life. This is a love story.’