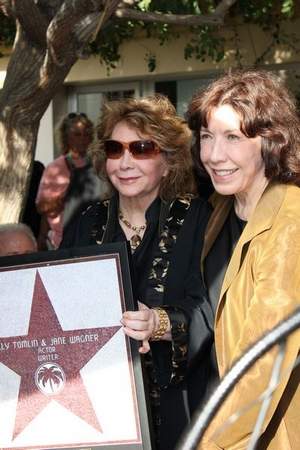 Meant to post this a few days ago but better late than never!

The great Lily Tomlin and her lovely partner of more than four decades, Jane Wagner, received a star on the Palm Springs Walk of Fame last week.

Can’t think of two people who deserve it more!

Said Lily at the ceremony: “Jane and I are so honored that the Palm Springs Walk of Stars has chosen to bestow this terrific honor upon us. We both have a real affinity for the Palm Springs community, and this is just one more way to connect with the wonderful people who live in and visit this beautiful part of the world.”

Tomlin and Wagner co-wrote six comedy television specials in which Tomlin starred. They also co-wrote and produced the Grammy Award-winning album, Edith Ann: And That’s the Truth, and Grammy-nominated albums Modern Scream and On Stage.

Among those present at the ceremony was the legendary Carol Channing, 91, who is pictured with Miss Tomlin, below.

“I was thrilled for her,” said Ms. Channing. “Lily is such a great artist.  Oh, I just love her and Jane.”

A month ago, Lily hosted the premiere of Dori Berinstein’s Carol Channing: Larger Than Life premiere at The Paley Center in Beverly Hills. 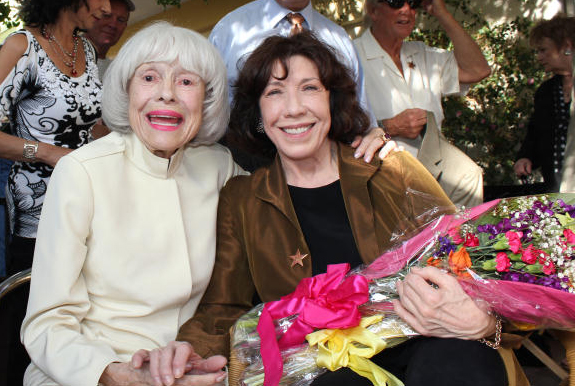