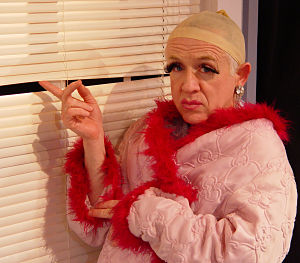 Big Announcement: Del Shores is hard at work on two brand new SORDID LIVES features… A VERY SORDID WEDDING and MERRY SORDID CHRISTMAS!! Big parts for Brother Boy. If you are reading this and have no idea what this is about go to Net flixs or wherever it is called and watch SORDID LIVES. It was a movie we shot on our own years ago with Beth Grant, Ann Walker, Olivia Newton John, Beau Bridges, Bonnie Bedalia, Newell Alexander, Rosemary Alexander, Delta Burke, Sarah Hunley… on and on. It became a HUGE cult classic. In the movie, I play a man in the mental hospital who thinks he is Tammy Wynette. When I would get all dolled up in my Tammy Wynette drag and parade down the hall in the movie, there was a very homophobic security guard named Bumper who would make cat calls at me. “Hey faggot! I see your pussy!” Well, in the end of the movie, I am escaping from the mental hospital in a pick up truck. I see that awful foul-mouthed security guard. So I take off my red high-heel shoe and hit him in the head. “Can you see my pussy now?” I holler. It became almost like the ROCKY HORROR PICTURE SHOW. Audiences all over the the country would holler the lines. But I had no idea the movie had gone international. I was in London, England walking down the street not knowing that SORDID LIVES is HUGE in England. A cab slowed down and the cab driver in a thick English accent yelled, “CAN YOU SEE MY PUSSY NOW!?” I stood there and got misty eyed. “I’ve made it!” I thought to myself. I am an International Star! They are hollering my lines from movies out of taxi cabs!!!!