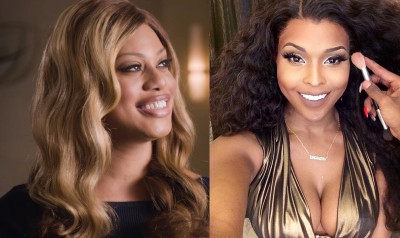 Laverne Cox and Amiyah Scott both nabbed regular roles on network prime-time television this year – transgender actresses player transgender characters. Cox took to social media today to acknowledge that it is Scott who made history since Star, the FOX show in which she appears, was on the air before the CBS drama Doubt on which Cox co-starred. Cox was reacting to a tweet by Scott who wanted to make sure she got proper credit:

Scott later wrote on Instagram: ‘… My earlier tweet of the history I made was not to discredit any other trans actors/actresses. It's all love & support and anyone who knows me, knows my spirit. But I had to claim MY credit‬ that was being overlooked. My credit = my check. And money itself is not my mission, stability is. I am an only child with older parents. I deal with family issues just like everyone else. And I say all this to say, my ambition is fueled to provide for my family. I nor my parents plates are full and I won't rest until they are. My parents gave me a childhood of what dreams are made of & I feel that it's my duty as the older we get to show them my gratitude. I want everything I deserve, I need it. And that is why @LaverneCox You… you have no idea how much respect I have for you for clarifying & gracefully taking accountability for non purposely overshadowing my first history making accomplishment. Which would only have been another to you; remarkable. Your class, I just… I'm speechless. Because you didn't have to do that. You didn't have to reach out. You don't owe me anything. And for that, I thank you & love you from the bottom of my heart. Your spirit inspires me.’

Scarcity is a myth. There is room for all of us. I celebrate those trans folks who have come before me and who are out there right now unsung, killing the game. Those names I know and don't know I sing your praises for it is revolutionary for a trans person to be seen and known in a world that says we don't exist, shouldn't exist. I love you! Follow your dreams! #TransIsBeautiful