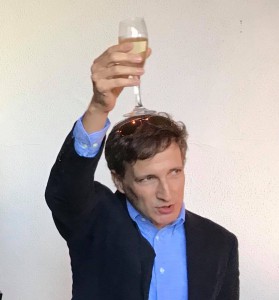 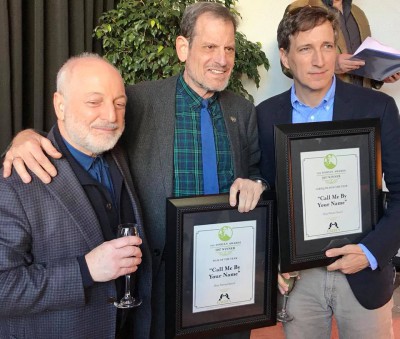 GALECA: The Society of LGBTQ Entertainment Critics hosted its Dorian Awards Winners Toast on Saturday afternoon at the Beverly Hilton Hotel in Beverly Hills, with its L.A.-area members and industry guests raising a glass in honor of the group’s most recent picks for the best in film and television. Producers and stars of Call Me By Your Name, Lady Bird director Greta Gerwig, HBO’s Big Little Lies, the Starz channel’s dark fantasy American Gods and FX’s Hollywood-lore drama Feud all took tributes and shared sometimes emotional behind-the-scenes stories about the winners.

Call Me By Your Name producers Peter Spears and Howard Rosenman accepted Sony Pictures Classics’ bittersweet love story’s prizes for both Film of the Year and LGBTQ Film of the Year, reflecting on how their own experiences growing up amid homophobia compelled them to help bring André Aciman’s same-titled novel to the screen. Aciman, at their side at the “champagne et pommes frites”-themed affair, smiled warmly.

Speaking to Name’s fervid millennial fan base in the U.S. and Europe, Spears told the gathering, “Ten years ago, we set out to make out the movie that we had needed when we were that age: A great cinematic romance that defied expectations. I think what’s been so beautiful is to discover that it wasn’t just the movie we needed — it turned out to be the movie that a lot of people needed.” In an especially emotional moment, Spears turned to Aciman, saying, “I can’t thank this guy enough.” 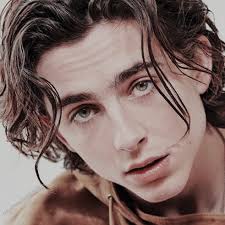 Actor Timothée Chalamet, Dorian Award winner for Film Performance of the Year — Actor (and also the group’s Rising Star honor) thanked GALECA via a note read to the guests by Spears.

Speaking for the filmmakers, including director Luca Guadagnino, and his costars Armie Hammer and Michael (Stuhlbarg, Dorian Winner for Supporting Film Performance — Actor), Chalamet relayed they were all “honored that our movie exists within the LGBTQ cannon now.” Chalamet added pointedly, “It is truly special that we find our spot not in the needed and often harrowing honest portrayals of how challenged the queer existence today, but rather in André Aciman and Luca’s refusal to define and boundary the experience of the characters in this film. Armie is often fond of saying, and I completely agree, that love is love is love. Boys can can like boys, girls can like girls. S***, you can even f*** peaches if the time calls for it!” 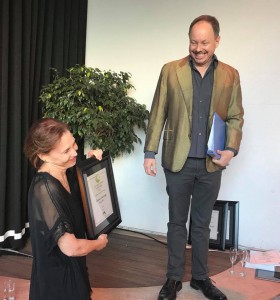 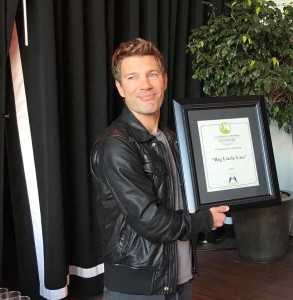 After some responding laughs, Spears finished Chalamet’s note to GALECA: “As someone said at Sundance, Mr. Perlman (Stuhlbarg’s character) is the father we all need in our lives, and the love between Oliver and Elio is the one we can only hope for.”

Evelyn O’Neill, producer of this year’s other well-regarded coming-of-age drama, Lady Bird, praised Greta Gerwig — Dorian winner for Director of the Year — for her ability to evince the film’s domineering mother-rebellious daughter dynamic and dialogue with “such rare believability. So many people have told me, ‘That was me and my mother!’” O’Neill, asked about her learning curve as a first-time producer, said she was surprised by how easy lining up Bird’s “stellar” cast was. “The amazing Saoirse Ronan read it and said, ‘I’m in!’ The great Laurie Metcalf — the same.” O’Neill also accepted Metcalf’s Dorian Award for Supporting Film Performance of the Year — Actress.

Per Saari, who runs Nicole Kidman’s production company Blossom Films, accepted GALECA Dorian Awards for both Big Little Lies (TV Drama of the Year) and Nicole Kidman (TV Performance of the Year — Actress). Saari spoke to his friend Kidman’s “tremendous empathy” for the characters she portrays, including abused wife Celeste in Lies. Some guests gasped in excitement when Saari relayed that Meryl Streep, winner of GALECA’s Timeless Star career achievement award, will be playing the mother of Celeste’s ill-fated abusive husband (Alexander Skarsgård) in the drama’s second season. 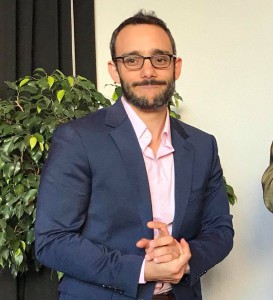 Accepting American Gods’ Unsung TV Show of the Year kudos was star Omid Abtahi, whose mortal character Salim seduced a male jinn (Arabian mythology’s version of someone with supernatural powers) in one meme-earning scene of the freshman drama. Abtahi pleased GALECA members with news that Salim’s journey will majorly expand in Gods’ otherwise hush-hush season two. In a proverbial could-hear-a-pin-drop moment, the Tehran-born, Irvine, Ca.-raised spoke of how, in the world’s rising displays of hate, he feared his role as a gay Muslim might aggravate homophobes and endanger his family. When buzz about his role started growing, “I got all these messages on social media — and I was afraid to read them.” Abtahi teared-up when added, “When I finally did, I found out all of them were positive! People wrote that were so excited to see a character no one sees on TV!

Meanwhile, Francis Lee, writer-director of the rural England-set gay romance God’s Own Country, Dorian Award winner for Unsung Film of the Year, sent a note expressing his gratitude to GALECA. “Critics have played a vital role in building awareness of this film,” Lee said in the note read to the crowd by John Griffiths, GALECA’s Executive Director. “Of all the awards this one feels very special. Thank you from a freezing Yorkshire.” 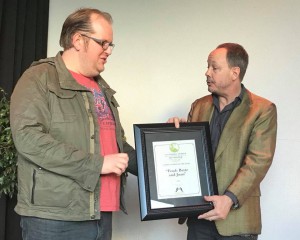 Dominic Burgess, the out British actor and budding filmmaker who evinced gay actor Victor Buono in Feud, joined to toast that Campy TV Show of the Year winner. In talking about the Ryan Murphy-stamped look at the legendary rivalry between movie queens Joan Crawford (Dorian nominee Jessica Lange) and Bette Davis (Susan Sarandon), Burgess described how “meticulous” Murphy, Lange and Sarandon were in immortalizing Hollywood’s bygone eras — and exposing the industry’s penchant for “sexism and ageism.”

GALECA, a 501 C-6 nonprofit comprised of over 200 journalists covering film and TV in the U.S., Canada and the U.K., aims to generate camaraderie in an unsettling media environment, elevate entertainment journalism and undermine LGBTQ-phobia and bullying.