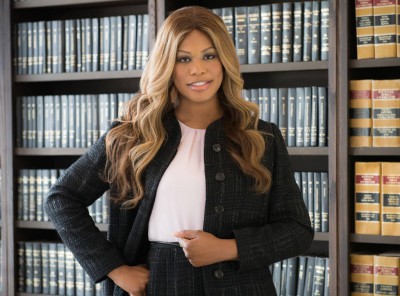 After airing just two episodes, CBS has canceled the legal drama Doubt which starred Katherine Heigl and featured Laverne Cox as a regular.

Cox had been highly visible in recent weeks as she heavily promoted the program on various talk shows including The Late Show With Stephen Colbert..

But ratings for the premiere were low and last week’s second episode even lower.

Cox still made history on the show as the first transgender performer to be a regular on a network series portraying a transgender character.

She played an Ivy League-educated defense attorney named Cameron Wirth. It was made clear in the first episode that Cameron’s co-workers know and accept her as a trans woman. Her storyline was more about her legal strategies and whether or not she can win her case than her trans identity.

‘What’s exciting about (the character) Cameron and being on CBS is that I’m an avid TV watcher,’ Cox told TV critics last summer.

‘A lot of people in my community watch TV and there weren’t people like me when I was growing up.’

There had been 13 episodes of Doubt completed. GLAAD reports that CBS will air the remaining 11 episodes later this year and make them available on CBS.com.

Whenever they do air, Those future episodes will show that Cameron has a dating life and romantic scenes.

‘It felt groundbreaking … when we started shooting that part,’ Cox said earlier this month on AOL Build.

‘I thought, “Okay, this is something I’ve never seen on TV.” I hadn’t personally seen a trans woman be pursued by a straight identified man on national television knowing that she’s transgender. That felt revolutionary, that felt groundbreaking. It was really exciting for me as an actress who’s always wanted to see that.’

Cox has not yet commented on the cancelation.