Did last night’s episode of “Glee” jump the shark when it came to the homicidal behavior of Sue Sylvester? 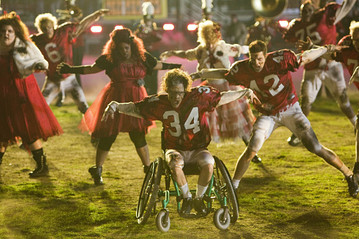 What did you all think of last night’s special episode of Glee which aired after the Super Bowl?

I loved that Thriller zombie half-time number and the The Dalton Warblers’ performance of Bills, Bills, Bills. But I gotta say, I think there was some jumping of the shark in the episode when it came to Sue Sylvester, played by Emmy and Golden Globe winner Jane Lynch.

We know Sue can be outrageously mean but is she supposed to be psychotic? Homicidal?

Her wanting to shoot Brittany (Heather Morris) out of cannon during a half-time show was just plain stupid and the fact that she was allowed to take it as far as she did was ridiculous.

We also got to see throw a gigantic tantrum at school, trashing and breaking things. It was not funny. It was annoying.

In the end, the cheerleaders in glee club quit the squad and she loses funding for the Cheerios as we learn when she is interviewed by Katie Couric who has chosen her as one of the biggest losers of the year because she failed to win the national cheerleading title for the seventh year in a row.

Anyway, I do hope Sue Sylvester will be reigned in again in future episodes to somewhat resemble a human being. Yes, a screwed-up human being but not an insane one.