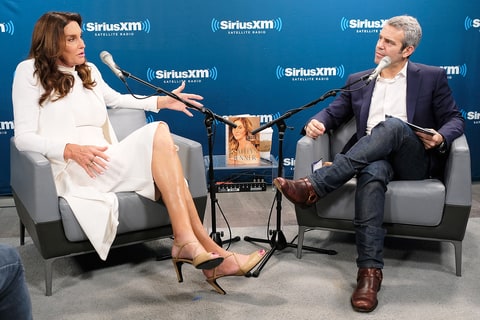 I’ve been watching all of Caitlyn Jenner’s TV appearances in recent days,

She’s been on The Today Show, Live With Kelly, The View and Tucker Carlson and had good moments (talking about young trans kids) and bad (voting for Trump).

But the best interview I’ve seen so far – the one I most enjoyed anyway – is the one with Andy Cohen on Radio Andy.

Andy didn’t let Caitlyn control the interview as she has with others.

Jenner asks Andy if he thinks she has hard on ex-wife Kris in the book. Andy is prepared and says yes: ‘Well, you blame her for your estrangement and abandonment of your kids, you say she was controlling, she was the boss. There are harsh truths in the book.’

Caitlyn replied that those are her truths and expressed anger that Kris is saying publicly that the book is filled with lies:
‘That really ticked me off … My book is honest and it’s my story. And I’m sorry she feels that way. I just don’t want her to alienate me from my children.’

As for the rest of the Kardashian clan, she has only spoken to Kim since the book’s release.

But she has not spoken with Khloe in almost two years.

‘That’s sad. I was very, very close to Khloe and I had 23 years of raising them. I met Khloe when she was five years old. Of course it hurts. She was on Howard Stern and called me a liar and that kind of pissed me off too because I never lied to her. ‘