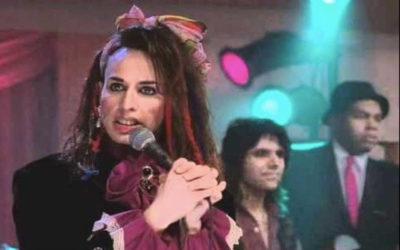 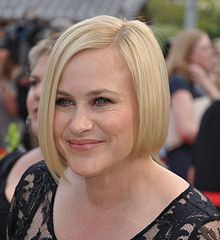 Oscar winning actress Patricia Arquette is thinking a lot about her younger sister Alexis this weekend.

Arquette will be presented with the Vanguard Award in Saturday at the GLAAD Media Awards in Los Angeles for her staunch support of the LGBT community.

‘Alexis taught us all about acceptance and love,’ Arquette told The Hollywood Reporter at a private GLAAD dinner in her honor on Thursday (30 March).

‘To me, Alexis was really my great vanguard. I think truthfully, every single trans person in the United States is a vanguard because it’s a very difficult life to live.’

But her career suffered after she came out publicly as a transgender woman.

When her late sibling as not included in this year’s Academy Awards In Memoriam segment paying tribute to those in the movie industry who died in the past year, Patricia spoke out.

She told Vanity Fair after the ceremony: ‘It’s really unfortunate that the Oscars decided they couldn’t show a trans person who was such an important person in this community. Because—trans kids—it could have meant a lot to them.’

Alexis died last September of complications from AIDS at the age of 47.

‘We are all really heartbroken about it,’ Patricia said this week. ‘It has taken me a long time (to talk about it). I’m still not quite there. It’s very raw and will probably always be hard.

‘You have certain loves of your life, deep loves with people who really impact you. People you care so much about. They change you. Alexis was that to each one of us. The spirit of Alexis will always be alive.’

Although difficult, Patricia said she is speaking out because US President Donald Trump is proving to not be the LGBTI ally he claimed he’d be.

‘Right now there is a mounting assault against the LGBTQ community so ready or not, you have to talk about it,’ she said.

‘Alexis talked to me about wanting to see a time when you could go into a real estate office and your realtor would be a trans man or trans woman. Or you could see a cop or a McDonald’s employee that is trans. We are so far from that today.’