“Will & Grace” Wednesday: Jack’s “marriage” to Rosario starts to cause a rift between he and Karen 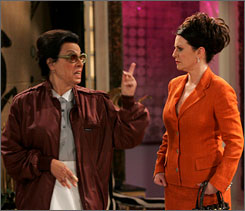 The love-hate relationship between Karen Walker (Megan Mullally) and her maid Rosario (Shelly Morrison) was one of the funniest on Will & Grace – especially when they two women would yell over each other in perfectly-timed insult-laden tirades.

For a time, Jack (Sean Hayes) lived with the women in Karen’s mansion. He and Rosario got married so she would not be deported and while they are a ridiculous couple, a real sweetness surfaced and Jack begins to look after his “wife” who must endure the reasonable demands of her boss.

But this throws off the equilibrium of the twisted relationship of Karen and her maid!