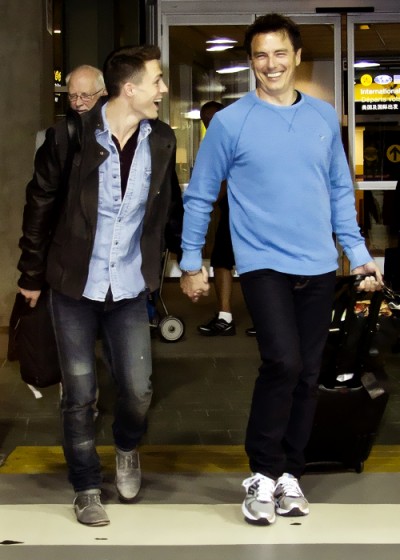 I didn’t even notice the paparazzi photos of John Barrowman and Colton Haynes holding hands.

But thanks to the terrific interview my pal Jim Halterman did with Barrowman for The Backlot, we now know all.

Says Barrowman: “Colton’s a great guy. He and I met on that first flight we had up to Vancouver…he said he was a fan and he watched Torchwood, and I thought how really sweet that this 24-year-old is a fan of mine. Like anybody in the cast, he’s not hard on the eyes.

JB: “It’s amazing, isn’t it? He’s got amazing structure. So we come off of the flight and there are paparazzi there. He looks at me and says, ‘Should we pose?’ I’m like, ‘No, just follow my lead.’ He said, ‘What are you going to do?’ That’s when I just grabbed his hand and walked. He didn’t know what to do. He said, ‘That’s f***ing hysterical.’ I’m like, ‘That’s the kind of guy I am.’ He’s a great kid and we have a great time and he’s becoming a really good friend, which I think is really nice.”