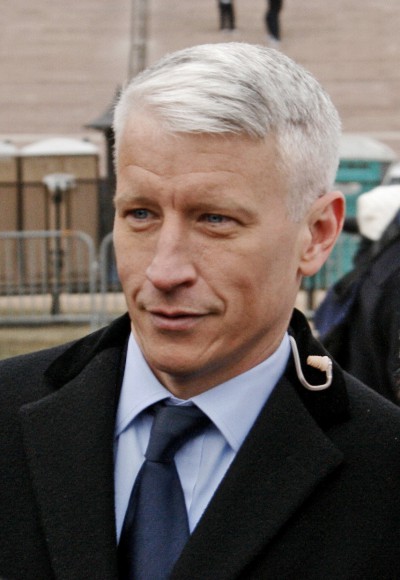 Anderson Cooper, thankfully, has been known to rock a snug black T-Shirt from time to time which reveals his biceps.

But he’s made clear those biceps are not big enough for his liking – so much so that he has new suits tailored for bigger muscles.

‘I’m convinced I’m going to become like Arnold Schwarzenegger or something – I’m gonna get really big and so my suits will need to be out a little bit and so I end up with a puffy suit,’ Cooper confessed this week while co-hosting Live With Kelly with pal Kelly Ripa.

‘There’s a lot of suit and not a lot of me,’ he confesses.

‘I’m convinced that I’m still growing. I’m convinced that one day the workout – which I’m avoiding – is actually going to take hold and I’m going to get like big muscles. So I’m always like, “You know what? Put some extra room in the suit arm because I think I’m gonna get bigger.”

Then the truth hits when he returns for a new suit: ‘Like three years later I go back and the guy’s like, “Your arms have shrunk.”‘

Puffy suits or not, Ripa had reassuring words for her friend: ‘The you that’s in there is the perfect amount of you.’