Anderson Cooper face is so many of us right now 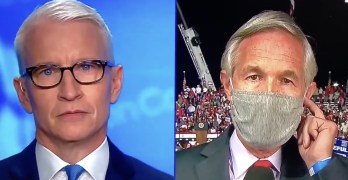 During CNN’s coverage of Donald Trump’s rally in Florida last night, the Village People’s classic hit Macho Man was played in the background.

Without having to utter a single word, anchor Anderson Cooper’s face said it all.

Anderson Cooper’s face when he hears they are playing “Macho Man” at @realDonaldTrump ‘s rally. pic.twitter.com/1SK23Z6yeR