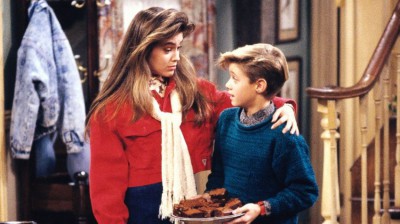 Danny Pintauro’s disclosure recently that he is HIV positive has brought him close again to his former Who’s the Boss co-star Alyssa Milano.

The two had starred together on the ABC sitcom for eight years but had lost touch once the series ended in 1992.

‘I am unbelievably grateful for our new story and look forward to creating lots of new chapters,’ Pintauro tells Huffington Post.

Although her co-stars Judith Light and Tony Danza had long been aware of the news, Milano found out along with the rest of the public. She was in tears last month while guest hosting The Talk when she talked about Pintauro.

‘She actually called me while she was driving to The Talk but it was early in the morning and I didn’t answer. It was a lovely message and I left her one after seeing her on the show,’ Pintauro says.

‘Later that night we started texting; she was my everything for the next few days. Encouraging, loving, concerned and just overall wanted to be on my side. We talked family and husbands and she connected me to some really terrific people.’

While Pintauro graduated from Stanford University, he did little acting. Milano went on to become a cast member on Melrose Place then spent eight years on the TV series Charmed. More recently, she starred in the ABC series Mistresses.

‘Danny and I didn’t talk for many years after the show was over,’ Milano said on The Talk. ‘When the show ended, it was a different time. We didn’t have cell phones or Facebook or anything. I would have been calling his parents house saying, “Hi! Can I talk to Danny?” (laughs). We didn’t have anything, no testing or anything. I’d lost contact with him for a long time.’