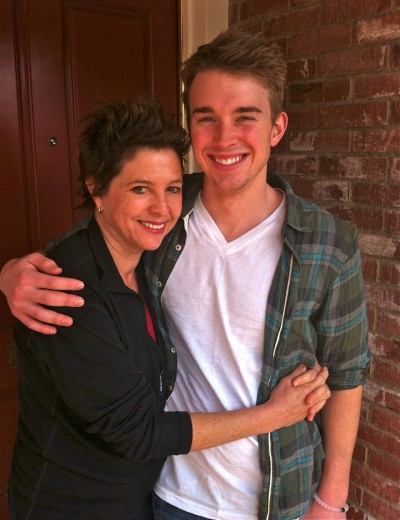 Don’t you just love this photo?

It was taken earlier today when Days of Our Lives star Chandler Massey met Kristy McNichol.

They happen to have the same publicist, Jeff Ballard, and he made the introduction.

“She is a wonderful actress and is so warm and down to earth,” Chandler said after meeting McNichol for the first time.

Kristy’s view of Chandler: “What a cutie!  He is so adorable and talented.”

As you know, Kristy earlier this month publicly acknowledged that she is a lesbian and did so because she wants to help LGBT kids who are bullied.

Although Kristy has not acted for more than two decades, the Emmy winner is still well-remembered for her television roles on Family and Empty Nest and such feature films as Little Darlings, Only When I Laugh and The Pirate Movie.

Chandler, meanwhile, is doing an outstanding job as gay teen Will Horton on Days of Our Lives. He’s been so good that the current issue of Soap Opera Digest, which just arrived in my mailbox today, names him as “Performer of the Week.”

“The young actor has had to delicately balance his alter-ego’s fragility, profound hurt and confusion, not to mention his intense anger at [his mother],” the magazine notes. “The material marks the first time Massey has really been pushed to show off all his skills and he has fully embraced the challenge.”