When Brittany Murphy came to Outfest 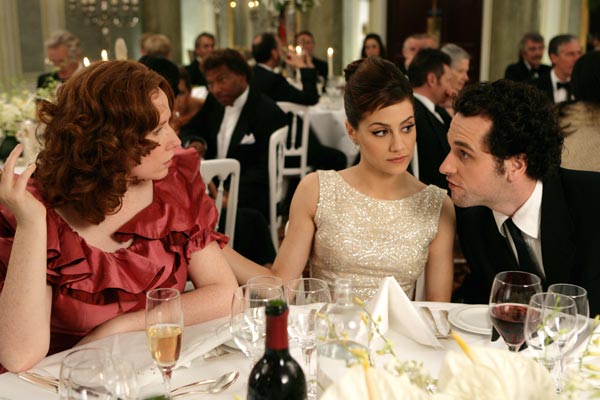 I never spoke with Brittany Murphy, who suddenly died this morning, but I remember seeing her at Outfest a few years back with Matthew Rhys promoting their indie flick Love and Other Disasters and I thought she was wonderful in this little gem of a film.

She was radiant on that day and seemed very excited to be at the festival of LBGT films. I loved the movie and wrote a review for my old Out In Hollywood blog. Here is an excerpt:

Rhys and Murphy play Peter and Jacks, a kind of Will & Grace type if pair (only they aren’t annoying) who live together and work in London and navigate dysfunctional love lives. Jacks tries to set him up with a gorgeous guy (Cabrera) who she’s sure is gay, but who really isn’t and is in love with her. She’s got a boyfriend she’s broken up with but still sleeps with out of habit, and Peter’s the kind of person who bumps into a hot guy in a hotel lobby and decides he is the love of his life…even though they have never met.
“I’ve never actually had a relationship…except in my head,” he tells her as they watch “Breakfast at Tiffany’s” together for the umpteenth time. He is despondent because he finds out hotel lobby guy has moved to NYC.
She tells him: I don’t think it’s healthy for you to have a long-distance relationship with someone you’ve never met.”

Let me say this: Murphy, whose character worships Audrey Hepburn and styles herself after the 60s icon, is the heart of the film and she is dazzling. Her shaky English accent is explained away by saying her character was born in England but raised in the U.S. from the age of 5. Her chemistry with Rhys and Cabrera is terrific and in the end, the film’s message is that love isn’t like it is in the movies: “It’s a process and not an event.”
The film was shot on a budget of $9 million [four] years ago. The director told the Outfest audience about what a tough time he had casting the role of Jacks until he saw Murphy read: “She seemed to embody the character immediately…when Matthew’s audition came in on tape, I was literally like ‘He’s Peter!’ Of course he was really busy so I had to push the entire movie for him…but he was worth it.”