You know, Sean Penn is so attractive as he is that I just never, not once, wondered what he would look like as a Gene Simmons-like rock star.

But now we know anyway thanks to a photos of Sean in bright red lipstick, long earrings, and big, teased hair that was snapped in Dublin as he shot a scene for his new movie This Must Be the Place.

Sean, who has spent much of the year in Haiti working tirelessly on earthquake relief, is back to work in film playing a wealthy rock star hunting for the man who killed his father, an ex-Nazi war criminal. 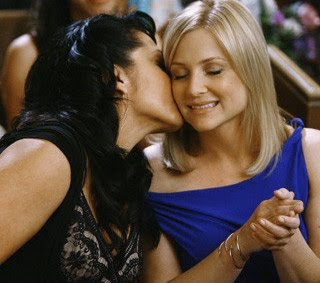 RENEWED LOVE: Callie (Sara Ramirez) and Arizona (Jessica Capshaw) survived the hospital shooting at the end of Gtey’s Anatomy and will, at least for awhile, enjoy some measure of bliss as a couple.
“At the end of last season, Callie and Arizona decided they would be together at any cost,” Sara tells TV Guide Magazine. “I think there’s a lot of people rooting for them to start building a family. So far this season, we are in a good place – together, happy and grateful to be alive.”

But Sara, whose doctor character has been romantically involved with both men and women, doesn’t expect it to be clear sailing ahead: “It’s a drama so they’ll need some conflict to come up.”

NO MOORE SURPRISES: It’s well-known that Oprah Winfrey is a huge fan of The Mary Tyler Moore Show. She has hosted a cast reunion on a replica of the show’s set and even filmed the famous opening of the show with her re-enacting Mary’s iconic moment of throwing her cap into the air.

But when Oprah’s staff came up with a surprise and invited Mary Tyler Moore herself onto the show without telling Oprah, she lost control: “I went into the ugly cry on the air.” Because of that, Oprah has made a rule that during the 25th and final year of her daytime show, she tells TV Guide Magazine must not be surprised like that again: “I don’t want to lose that kind of control. If you’ve ever looked at that tape, snot’s running out of my nose and I had such a headache that I couldn’t focus. I don’t handle surprise very well.”