SOPHIA WOULD BE PISSED! This is sickening: Estelle Getty, the beloved star of The Golden Girls, won the Emmy in 1988 for her performance as Sophia. So where is that Emmy today? Who the heck knows. Her two sons, after their mom died in 2008, could not agree on how to split her estate. So the Emmy ended up on eBay!

One of the sons, Carl Gettlemen, now tells Reuters, “The Emmy had far more sentimental value than (money value) for me, but there’s no way to split an Emmy between two (people). It should have been made accessible to the public. She was so appreciative of her fans, she would have preferred it somewhere where (they) could see it.” 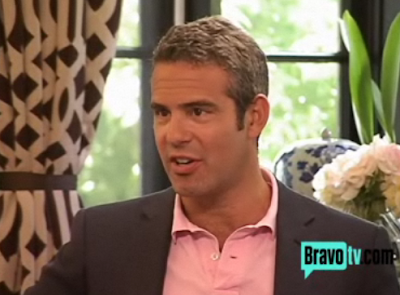 BRAVO BRAVO! Andy Cohen has got a gay man’s dream job as Bravo’s senior VP of original programming and development.

His network is home to the Real Housewives franchise, the Emmy-winning Top Chef, Flipping Out with Jeff Lewis and, of course,  Kathy Griffin‘s My Life on The D List.

It is, quite simply, the gayest channel in the universe. But in an interview with Blackbook.com, Andy insists the network is, at the most, bi.

“I always saying we’re bi, but I think it’s kind of how I view myself being gay—it’s just one of things that I am,” he explains. “So Bravo may or may not be gay, but I think there’s a lot of other things going on. I think for the gay people on Bravo, it’s one of the things that they are—they’re not on Bravo because they’re gay. The people that are gay on Bravo, like Brad on Rachel Zoe or Jeff on Flipping Out, they’re gay but they’re also great at what they do and that’s why they’re on Bravo and that’s important.” BATTLING: Michael Douglas’s battle against throat cancer has begun at the same time as he is doing promotion for Wall Street: Money Never Sleeps.
I wish him all the luck in the world in this fight.
He was one of my first crush’s from his The Streets of San Francisco days and I have enjoyed so many of his movies such as Romancing the Stone, War of the Roses, Fatal Attraction, Wonder Boys, The American President, Disclosure, Running, and of course  Basic Instinct (I’ll never forget seeing the especially steamy extended version in London in the summer of 1992!).
Michael, who is 65 and married to fellow Oscar winner Catherine Zeta-Jones told David Letterman last night that the cancer is worse than initially thought:  “It’s a stage four, which is intense, and they gotta go at it.  I am head and neck, I am above the neck, so nothing’s gone down and the expectations are good. You like to be down at stage one but the big thing you worry about is it spreading.”The son of screen legend Kirk Douglas said he had been suffering from throat problems for several months: “I went through a litany of doctors and tests and they didn’t find anything and then I had a great summer after some other personal adversities.” He said he had spent “a wonderful summer with Catherine and the kids in Spain. We went to Russia, St. Petersburg, which is fantastic.”

“I came back and a guy said ‘Let me have a look’. All happened within three weeks. They got a biopsy and analyzed it.”