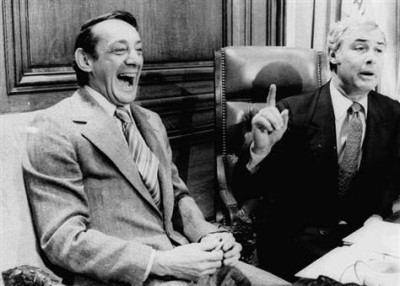 This is a sad anniversary: It was 34 years ago that San Francisco Supervisor Harvey Milk was assassinated in his City Hall office.

Milk was one of the country’s first openly gay elected officials and the movie about his life won star Sean Penn and screenwriter Dustin Lance Black Academy Awards.

Cleve Jones, an LGBT and AIDS activist who worked closely with Milk (and is portrayed in the film by Emile Hirsch) has posted this photo of Milk and Moscone on his Facebook page and written: “They were two of the most charismatic and genuinely empathetic political leaders I’ve ever known.”