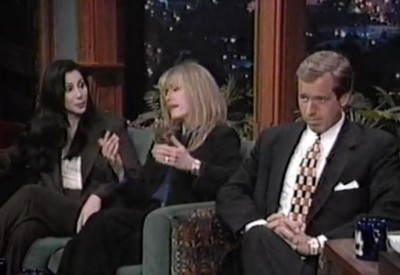 When Cher was promoting her 1996 album It’s a Man’s World and her directorial debut If These Walls Could Talk, I taped most of her interviews on VHS because that’s a thing a gay guy did in the 90s.

This appearance on The Tonight Show was one of my favorites and not because of Cher’s solo interview which was just fine. It was the chemistry she had with the subsequent guests: Jane Fonda and NBC newsman Brian Williams. Jane was in the middle of her marriage to Ted Turner and was focused on his world along with an occasional fitness video was promoting her new book Cooking For Healthy Living which I bought after seeing this appearance.

The connection between Cher and Jane was great as they reminisced about a weekend they spent at Fonda’s ranch with Kate Jackson and Cher told the women she had once wanted to be a priest.

Then Williams comes out and this is where the real magic begins as Jane and Cher remark on his handsome looks and Cher she finds him “very attractive in a Republican kind of way.”

The women are having a ball at this point and I love all the cutaways of them laughing and Williams tells some campaign stories and does imitations of Bill Clinton, Ronald Reagan and Bob Dole.

I think you will enjoy this!