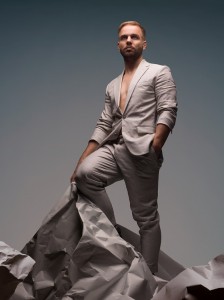 One of my very favorite singer-songwriters, Tom Goss, has released the emotional music video for the single Regretting off his seventh album Territories .

The video stars Tom and Mean Girls actor Daniel Franzese who had appeared in the earlier Goss videos for Bufadora and Quebec.

Territories is a 15-track concept album, produced by Ian Carmichael about the complications of love.

Some background: After walking in on his husband with another lover, Tom and his husband decided to open their marriage, resulting in Tom falling in love with another man, to his husband’s dismay. Regretting comes full circle with Tom expressing his boundless love for his husband.

“At the time, I was going through a really rough patch with my husband. I was writing a lot about the struggles we were having and I realized that I wasn’t focusing enough on why I was still in the relationship. I wasn’t honoring what we had built, what was still beautiful, and the potential futureI hoped we still would have,” Tom tells Gay Times. “‘Regretting is ultimately about not regretting. Regardless of how hard things have been, or may be in the future, I won’t live in regret. I will work to remember the wonderful, the beautiful, and the inspirational, regardless of how hard it may be from moment to moment.”