WATCH: “The Carol Burnett Show” parody of “Maude” with Isabelle Sanford as Florida the maid is a hoot! 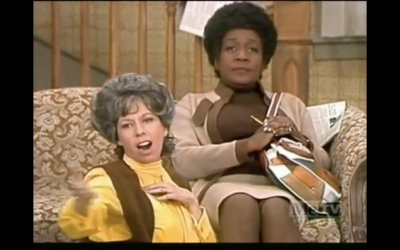 Carol Burnett takes on the role of Maude Findley in this fabulous parody from her classic CBS variety show. If you are not familiar with the great sitcom Maude, which ran on CBS from 1972-78, then you won’t really get it but trust me, it’s a bit of a hoot.

Maude turned Beatrice Arthur into an Emmy-winning television star even before she began her 1985-92 run on The Golden Girls. She had previously been mainly a star of the stage and won the Tony Award for Mame.

So here we have Carol Burnett, Vicki Lawrence, Harvey Korman and guest star Isabelle Sanford doing in some ways a typical scene of Maude only heightened and compressed.

I hope you enjoy!