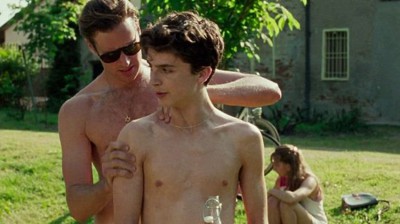 Following its premiere at the Sundance Film Festival, a scene from the gay-themed drama Call Me By Your Name has been unveiled.

But sorry, it’s not the much-buzzed about scene in which a 17-year-old student (Timothée Chalamet) masturbates with a cut-open peach.

In this scene, we see the student’s handsome and shirtless tutor (Armie Hammer) flirt with him while taking a brief water break during a volleyball game.

He starts to massage the student’s shoulder and says: ‘Trust me, I’m about to become a doctor.’

Chalamet’s character is uncomfortable . and tries to movie away.

The tutor tells him: ‘That’s the problem, you’re too stressed. You just need to relax a little bit.’

The two then have sex.

There was some speculation over whether that scene would make the movie.

Call Me By Your Name will be released later this year.