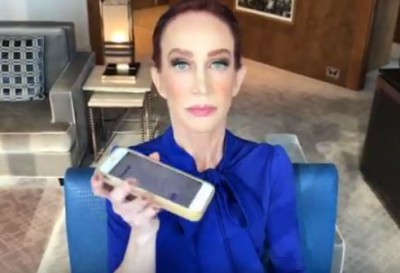 Andy Cohen’s little interview with TMZ has unleashed Kathy Griffin. In this new video, she accuses Cohen of offering her cocaine before her two guest appearances on Watch What Happens Live and she calls Harvey Levin the gay male version of Kellyanne Conway. She claims Levin pulled her aside ‘and tried to brainwash me into becoming a Trump fan.’ ‘I tried to say,
‘Harvey, you’re a gay guy. You think Trump gives a shit about YOU?” She gives Levin’s private phone number out. ‘I’m out of fucks to give,’ She also takes on CNN head Jeff Zucker and shares about the time she called him crying and begged for her New Year’s Eve gig. She was re-hired at 20% less salary. UPDATE: Andy Cohen replies with this tweet:

I am completely stunned by this story. It is 100% false and totally made up.