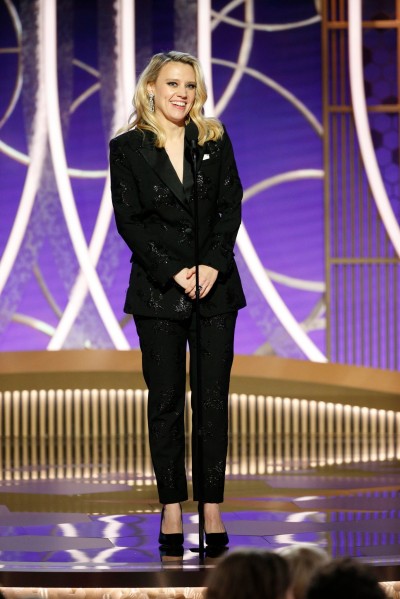 In her Golden Globes presentation speech tonight, Kate McKinnon seemingly held back tears as she spoke candidly and with humor about being gay and the role Ellen DeGeneres played in her understanding of herself, and what it means for L.G.B.T.Q. people to see themselves represented onscreen.

For me, it was the most moving moment of the night – and one of the m most important.

Below in the video but here is an excerpt:

In 1997, when Ellen’s sitcom was in the height of its popularity, I was in my mother’s basement lifting weights in front of the mirror and thinking, “Am I gay?” And I was, and I still am. But that’s a very scary thing to suddenly know about yourself. It’s sort of like doing 23andMe, and discovering that you have alien DNA. And the only thing that made it less scary was seeing Ellen on TV.

She risked her entire life and her entire career in order to tell the truth, and she suffered greatly for it. Of course, attitudes change, but only because brave people like Ellen jump into the fire to make them change. And if I hadn’t seen her on TV, I would have thought, “I could never be on TV. They don’t let L.G.B.T. people on TV.” And more than that, I would have gone on thinking that I was an alien and that I maybe didn’t even have a right to be here. So thank you, Ellen, for giving me a shot. A shot at a good life.”