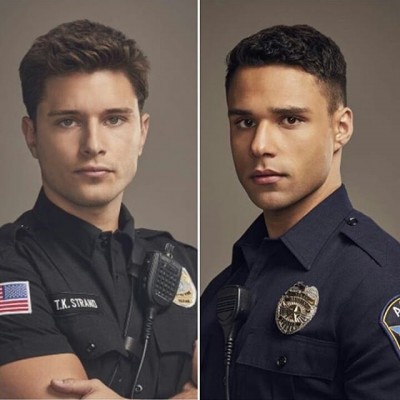 One is a firefighter whose dad is portrayed by Rob Lowe and the other is a hot cop.

They are TK (Ronen Rubinstein) and Carlos (Rafael Silva) and they are the biggest reason I am loving the new Ryan Murphy series 911: Lone Star.

The show follows a sophisticated New York firefighter (Lowe) who, along with his openly gay son (Rubinstein), relocates from Manhattan to Austin, Texas and must try to balance the duties of saving those who are at their most vulnerable and solving the problems in his own life.

TK is coming off a broken heart and an overdose when father and son relocate and he quickly meets Austin police officer Carlos.

The clips below are their storyline from the first episodes and I love so much about it – passionate, shirtless kissing and realistic gay dating scenarios.

So far, so good and I also love how Lowe’s character is a loving dad who wholeheartedly supports his gay son.