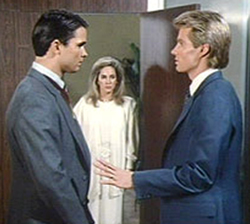 Over Dynasty’s nine-season run, the challenge of getting a gay man on television’s most popular show was nothing compared to the multi-year battle it took to keep him there.

Reported by Matt Baume, this is the story of the fights on-screen and behind-the-scenes over one of TVs first recurring gay characters, and the kiss that changed Hollywood. The season one storyline involving Steven Carrington and the killing of his lover by his father Blake Carrington (convicted of manslaughter) was sickening. Blake was such a cruel homophobe and I retroactively hate him – and Ronald Reagan. Bravo to actor Al Corley for leaving the show after season two when the network insisted that the character become “straight.”