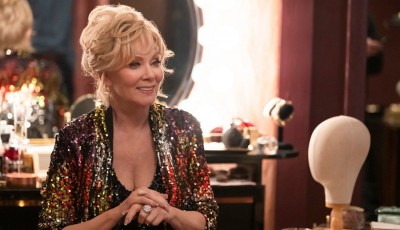 Jean Smart turns 70 today and I hope she gets a belated birthday present on Sunday in the form of another Emmy Award.

She nominated for lead actress in a comedy for Hacks and, I think, she will win. It would be gravy if she were also win for her more dramatic work in Mare of Eastown.

I’ve loved her since her days as Charlene on Designing Women and have been astounded by her series of acting triumphs since then on such shows as Frasier, 24, Samantha Who?, Fargo, and Watchmen, among others.

Film credits include The Brady Bunch Movie, Sweet Home Alabama, Garden State, A Simple Favor and she received an Independent Spirit Award nomination for Guinevere in 1999.

Here are some of my favorite Jean Smart scenes: