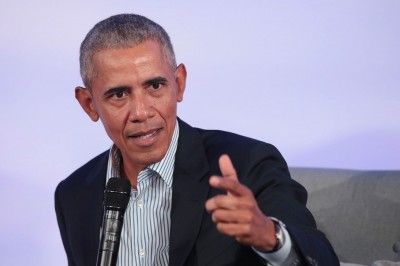 Former President Barack Obama spoke out tonight during virtual town hall hosted by My Brother’s Keeper Alliance, a program of the Obama Foundation. He personally thanked protesters in the streets across the nation following the death of George Floyd.

“As tragic as these past few weeks have been, as difficult and scary and uncertain as they’ve been, they’ve also been an incredible opportunity for people to be awakened to some of these underlying trends and they offer an opportunity for us to all work together to tackle them. To take them on. To change America and make it live up to its highest ideals.”

He drew comparison to 1960s: “There is something different here. You look at those protests and that was a far more representative cross-section of America out on the streets peacefully protesting…that didn’t exist back in the 1960s…There is a change in mindset that’s taking place, a greater recognition, that we can do better.”

Obama didn’t directly criticize anyone during the event, but he closed with a veiled message to those Americans who have criticized or are worried about the protests.

“And for those who have been talking about protests, just remember, this country was founded on protest. It is called the American Revolution,” he said. “And every step of progress in this country, every expansion of freedom, every expression of our deepest ideals, has been won through efforts that made the status quo uncomfortable. And we should all be thankful for folks who are willing in a peaceful, disciplined way to be out there making a difference.”

The nation’s first black president closed the speech with a direct call to the mostly young people who have recently taken to the streets: “Keep working. And stay hopeful.”
“This is a moment, and we have had moments like this before where people are paying attention. And that doesn’t mean that everything will get solved, so don’t get disheartened, because this is a marathon, not a sprint. But the fact that people are paying attention provides an opportunity to educate, activate, mobilize and act,” Obama said. “And I hope we are able to seize this moment.”