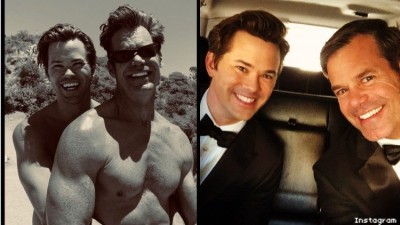 The multi-talented Andrew Rannells is a frequent guest on Late Night with Seth Meyers and made his latest visit last night – this time via Zoom.

He talks about his upcoming movie The Prom which involved dancing with Meryl Streep, about his first on-camera role as a stripper on Sex and the City, and about the uncertain future of Broadway during the Covid-19 pandemic.

My favorite part of the interview is when Andrew talks about why he got self-conscious while filming a sex scene with real-life boyfriend Tuc Watkins in the series Black Monday: “When it came time to actually filming it all of a sudden I had this realization that I was surrounded by the crew who have now become friends of mine. I thought, ‘I wonder if they’re thinking, ‘So that’s what it looks like, that’s what they do at home, that’s how they touch each other!” So then I got weirdly self-conscious in a different way.”