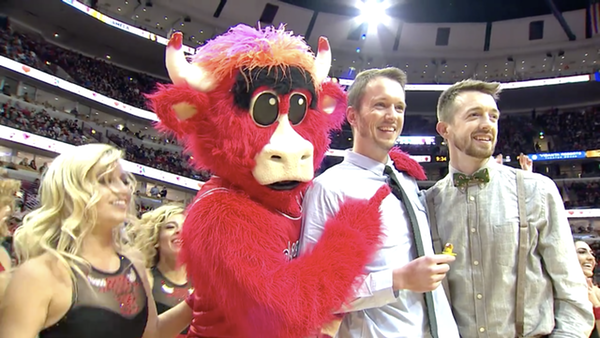 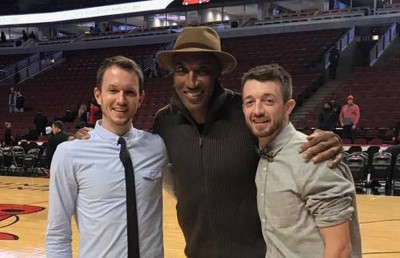 Love this story – love the whole thing: Jake Conrad decided to get an NBA team involved when he was planning his marriage proposal to Michael Holtzman.

During halftime of the NBA game between the Chicago Bulls and San Antonio Spurs, the epic proposal took place on the court.

Conrad had the very enthusiastic help of the team’s mascot, Bennie the Bull, and their dancing cheerleaders who are called the Luvabulls.

The mascot brought an unsuspecting Holtzman onto the court as the song Do You Love Me blared.

Bennie combed Michael’s hair, the Lovabulls formed an aisle and Holtzman turned around to see Conrad making his way to him with ring in hand.

He got on one knee and popped the question.

Holtzman said ‘yes’ and there was cheering in the crowd.

The announcer can be heard saying, “Congratulations Michael and James’ as the happy couple shared a hug and a brief kiss.

Bennie, standing near them, raised his hands in triumph and delight and the Lovabulls danced around the happy pair.

Retired NBA star Scottie Pippen, a former player for the Bulls, was at the game and congratulated the couple and posed for a photo with them.

The surprise was clearly put together quickly.

Just two days earlier, Conrad had posted on Facebook: ‘HELP! Does anyone know ANYONE I can contact at the Chicago Bulls offices?’

Then on Thursday he posted: ‘Thank you to everyone! I was trying to work on a surprise for Michael tonight at the game (thank goodness he doesn’t have Facebook). I finally got in touch with the organization! Let’s say…this is going to be a VERY memorable evening!!!’