Wanda Sykes got a huge reception Saturday night when she walked onto the stage to welcome the crowd to the Human Rights Campaign dinner at the Century Plaza Hotel.

“I should’ve come out a looooong time ago!” she said. “It’s such an honor to be here.”

Then she was off and running. 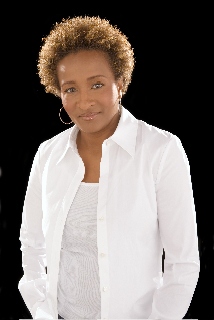 On being an in-demand activist: “I’m busy! Gay, gay, gay all the time. I didn’t know it was gonna be thus much work! Geez! Every day, ‘This is something gay, can you do this?” I’ll be there! …And I keep saying gay. I haven’t got all the correct terminology down. So many women come up to me, hard-core lesbians: “Wanda! You gotta stop saying gay! You’re a lesbian!…you’re not gay! Men are gay! You’re a lesbian, you’re a woman!” I’m like calm down dyke I just started this!”

On gay marriage opponents: “It’s just amazing to me how people get involved in something that doesn’t concern them. You know, if they would just mind their own damned business…The economy’s all messed up, it’s all about the economy right now. And think of all that money they’re losing (from) gay weddings. Wouldn’t you love to have some of that gay wedding money?”

On gay marriage: “It’s just a relationship. It’s just two people who love each other, just trying to deal with each other and get through life together, that’s all. Just trying to build something together. Relationships are all the same. You’ve got one person who likes to talk a lot and the other person who pretends to listen.”

On Republicans: “Talk about evil people, they’re just nasty! (Rush Limbaugh) saying, ‘I want the president to fail!’ What kind of bullshit is that? He thinks screw everybody else. Screw everybody, I just want to win! That’s treason, right? I’m like, ‘Let’s not close Guantanamo (Bay), send Rush Limbaugh’s big ass over there! He’s a terrorist!’”

On aging: “It ain’t fun getting old. It’s not. I don’t consider myself old it’s just little things that happen that people don’t tell you about. The bladder ain’t what it used to be. I used to carry an extra pair of panties in my purse back in the day in case I got lucky. Now it’s in case I sneeze!”

Later today: My recap of a memorable HRC dinner including red carpet interviews with Sykes, US Sen. Diuanne Feinstein and NAACP Executive Director Julian Biond whose remarkable speech you will be hearing as lot about!