Vince Vaughn talks about gay joke in “The Dilemma” and says: “I’m glad to hear it’s staying the movie.” 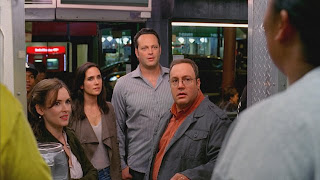 Okay, here’s the deal: I’m officially sick of the whole controversy of the gay joke in the upcoming comedy The Dilemma.

I wish the writers and director Ron Howard could have found  a way to not have it in because using “gay” as a pejorative in this day and age is offensive and not necessary. Star Vince Vaughn’s character says in a workplace scene: “Electric cars are gay.” He goes on to make clear that he doesn’t mean “homosexual, gay, but, you know, my parents are chaperoning the dance, gay.”

Anyway, in what I hope will be the last word from Vaughn on this, the actor remarked on director Howard’s recent comments to the LA Times that the joke will remain: “I’m glad to hear it’s staying the movie,” he told Q100′s Bert Radio Show this week. “It wasn’t a derogatory term… We clarified within the joke [that it was] not ‘homosexual-gay’ but, you know, your parents are chaperoning a dance.”