Victor Garber on Olympia Dukakis: “She had quite a life, and she sure made the most of it” 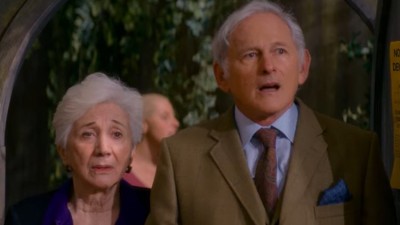 The fourth installment of the Tales of the City series was one of the last projects Olympia Dukakis worked on before she died this last weekend at the age of 89.

And in the Netflix series, Dukakis was paired with a pseudo-love interest/friend/fellow book enthusiast Sam Garland, played by Victor Garber.

The Advocate caught up with Garber to discuss the life and work of his former costar and told him how much I enjoyed the chemistry between his character and Dukakis’s Anna Madrigal.

“Yes, they were quite a pair,” Garber recalled. “My first reaction to the news of her passing was of course sadness, but she had quite a life, and she sure made the most of it. I think to all of us, she’s always been a renegade and forged ahead in her own unique way. She was determined to do what she wanted to do, and as a result she had such a wonderful career.”

Garber was asked what he’ll remember most about working with Dukakis.

“Well, I’ve always admired her, so it was just a thrill to be able to work alongside her for all of our scenes. Because of her age, she was compromised to an extent, but she never failed to really impress me. When she would finally get on the set and got into the scene, she really got there, and her determination left an indelible impression.”

“It was kind of like watching a violet bloom. She took her time and honestly, she was mesmerizing Yet, at the same time it was infuriating,” Garber said with a laugh.

Garber said that Dukakis was the queen on the set, and everyone was in deference to her. “And it was the just the right thing to do for her since she earned her status.”

To Garber, Dukakis’s talents and contributions are what will be missed most. “We should just be grateful that we had her for as long as we did, and I’m personally grateful that I had the wonderful opportunity to work with her. And her tremendous body of work will live on so that we and future generations can continue to enjoy all her terrific performances. She was one of a kind.”