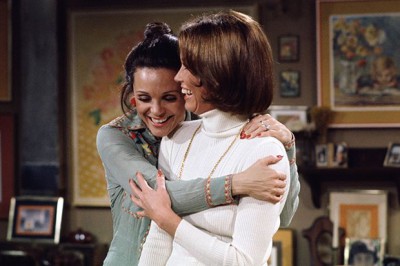 Happy Saturday everyone! Thanks for your patience as I put the blog on the back burner for at least a few more weeks. It turns out I can’t stay away completely so I will be sporadically sharing a post here and there including some stuff from the archives like the following post. Enjoy!

As far as female friendships on television go, the one between Mary Richards and Rhoda Morgenstern is almost right up there with Lucy Ricardo and Ethel Mertz.

It was heartbreaking when, after four seasons, Rhoda (Valerie Harper) left Minneapolis to move back to New York City. Except for a handful of crossover episodes and a TV movie decades later, that was it for Rhoda and Mary (Mary Tyler Moore).

I remember watching the first episode of Rhoda – which ran for five seasons – and remember this scene that has Mary dropping Rhoda off at the airport. But when I bought the first season of Rhoda on DVD a few years ago, that scene was not included.

Earlier today, it surfaced on my YouTube feed and it makes me so happy.