Thomas Roberts back in NYC and on TV each day! 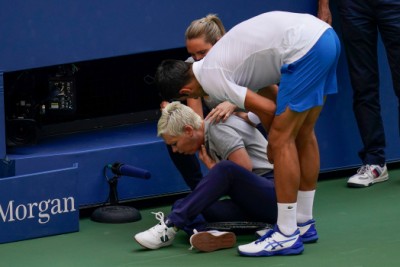 Top-seeded Novak Djokovic was defaulted from his fourth-round match at the US Open after a tennis ball he hit in anger struck a line judge in the neck on Sunday.

As he walked to the Arthur Ashe Stadium sideline for a changeover, trailing Pablo Carreno Busta 6-5 in the first set, Djokovic — who was seeded and ranked No. 1 and an overwhelming favorite for the championship — angrily smacked a ball behind him. The ball flew right at the line judge, who dropped to her knees at the back of the court and reached for her neck.

During a discussion of about 10 minutes near the net involving chair umpire Aurelie Tourte, tournament referee Soeren Friemel and Grand Slam supervisor Andreas Egli, Djokovic appeared to be pleading his case. But eventually, he walked over to shake hands with Carreno Busta.

Tourte then announced that Djokovic was defaulted, the tennis equivalent of an ejection.

It’s a real setback for Djokovic who has been undefeated this season and was trying to win his 18th grand slam title. Roger Federer holds the record with 20 while Rafael Nadal has 19.

This whole situation has left me really sad and empty. I checked on the lines person and the tournament told me that thank God she is feeling ok. I‘m extremely sorry to have caused her such stress. So unintended. So wrong. I’m not disclosing her name to respect her privacy. As for the disqualification, I need to go back within and work on my disappointment and turn this all into a lesson for my growth and evolution as a player and human being. I apologize to the @usopen tournament and everyone associated for my behavior. I’m very grateful to my team and family for being my rock support, and my fans for always being there with me. Thank you and I’m so sorry. Cela ova situacija me čini zaista tužnim i praznim. Proverio sam kako se oseća linijski sudija, i prema informacijama koje sam dobio, oseća se dobro, hvala Bogu. Njeno ime ne mogu da otkrijem zbog očuvanja njene privatnosti. Jako mi je žao što sam joj naneo takav stres. Nije bilo namerno. Bilo je pogrešno. Želim da ovo neprijatno iskustvo, diskvalifikaciju sa turnira, pretvorim u važnu životnu lekciju, kako bih nastavio da rastem i razvijam se kao čovek, ali i teniser. Izvinjavam se organizatorima US Opena. Veoma sam zahvalan svom timu i porodici što mi pružaju snažnu podršku, kao i mojim navijačima jer su uvek uz mene. Hvala vam i žao mi je. Bio je ovo težak dan za sve.

Thomas Roberts back in NYC and on TV each day!