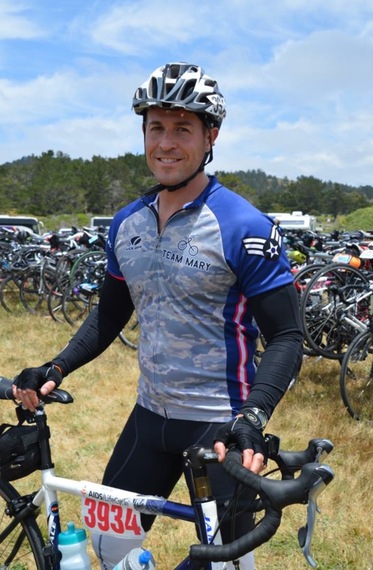 When this year’s AIDS/LifeCycle ride from San Francisco to Los Angeles kicked off last Sunday, U.S. Air Force Captain Anthony Interrante was among the riders.

He is pedaling 545-mile to raise money to fight HIV.

Interrante managed to amass nearly $60,000 in pledges while working as a critical-care flight nurse stationed in Afghanistan.

How did the openly gay military man do it?

With the help of Grindr and Scruff which, it turns out, can be used for more than hooking up.

‘People told me I should send out emails to friends telling them about my training and asking for their support,’ he tells Huffington Post in a story written by my very good friend Jim Key.

‘But training wasn’t exactly something that comes easy in Bagram. If I had to talk about training, I’d end up having to pay my own way.

‘I would engage with everyone around the world who would send me a “woof” or whatever, eventually telling them that I was going to be riding 545 miles to help end HIV and that I’d appreciate their support. I was amazed by how generous people were.’

Interrante, 34, has been open about his sexuality for the entire eight years he has been in the US military even though Don’t Ask Don’t Tell was not officially repealed until fall 2011.

But he is open about who he is and about using gay hook-up sites like Grindr and Scruff.

The ride will end in Los Angeles on Saturday.