TV Reruns: When Joan Crawford joined Lucille Ball and Vivian Vance for an episode of “The Lucy Show” 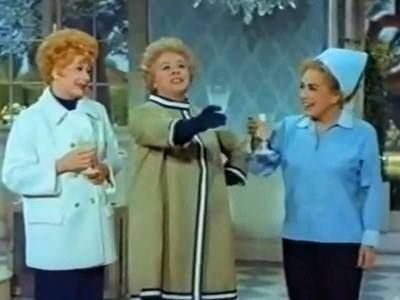 In this 1968 episode of The Lucy Show, Lucy and Vivian’s (who’s visiting Lucy) car breaks down in the middle of nowhere. They walk to a house down the road to see if they can call an auto club and the house is owned by none other than Joan Crawford, the movie star. All her furniture has been sent out for cleaning, so Lucy and Viv think she’s broke and try to raise money for the star.

According to Everything Lucy website: This is one of the episodes that Lucille Ball was not happy to make. According to known Hollywood sources, Joan Crawford was often drunk on the set during taping which lead to frequent arguments between Lucy and her. Crawford was also late for rehearsals, and couldn’t remember her lines. Lucille hated working with people who weren’t professional and on their toes. Joan feared that Lucy wanted to replace her with Gloria Swanson. There are many opinions as to why Crawford’s behaviour is less than professional. Some say she is so intimidated by Lucille that she is nervous and shy. Others say she is already an out-of-control alcoholic. Crawford does seem ill at ease playing herself, and has trouble projecting her voice.