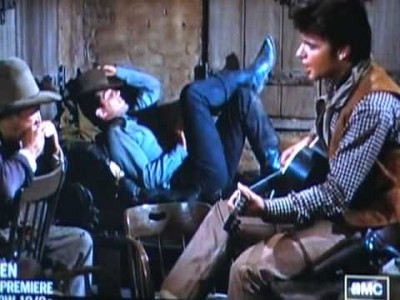 One of my favorite movies from the TCM Classic Film Festival in 2012 at Grauman’s Chinese Theater: Rio Bravo.

This 1959 Western is about small-town sheriff (John Wayne) in the American West and he enlists the help of a cripple (Walter Brennan), a drunk (Dean Martin) and a young gunfighter (Ricky Nelson). The sheriff also finds time for romance with a beautiful young widow (Angie Dickinson).

As I was watching the film, I remember thinking to myself, “They’ve got two of the most successful singers in history – Ricky Nelson and Dean Martin – in dramatic roles. What a pity we don’t get to hear them sing.”

But we DO! I had never seen the film so was not aware of this little sing-along.

Loved it and you will too.