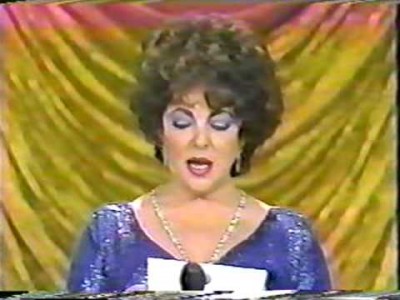 The late Elizabeth Taylor was best known for her movie career but she also triumphed on Broadway.

The two-time Oscar winner was nominated for a Tony Award for best lead actress in a play in 1981 for her performance in The Little Foxes which she also performed in productions in London and Los Angeles. Two years later, she returned to Broadway with ex-husband Richard Burton in Private Lives.

I’m sad I never got to see her on stage but I did see her hilarious appearance at The Tony Awards where she presented Best Musical to 42nd Street.

]She cracks herself up – and everyone else – by making what seems to be an acceptance speech then has a lot of trouble reading an endless list of producer credits. The comic highlight comes when she refers to famed producer James Nederlander as “James Nedleheimer.”

Fast-forward 20 years and Miss Taylor was a presenter at the 2001 Golden Globe Awards – the first awards show I ever covered in person. She was the best dramatic picture presenter and made producer Dick Clark awfully nervous when he thought she was about to open the envelope and announce the winner without reading off the nominees.