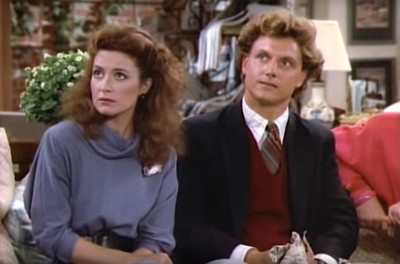 Tony Goldwyn is currently on Broadway portraying a gay man in the two-part epic play which follows the struggles of three generations of gay men in the shadow of AIDS.

This isn’t the first time Goldwyn, who went on to star in ABC’s Scandal and the film Ghost, has portrayed a gay man. In the late 1980s, he guest-starred on Designing Women as a young man dying of AIDS who asks the designers to plan his funeral.

He’s confronted by an ugly bigot whose words, sadly, reflect what many people thought at the time. Below an excerpt of the interview with NewNowNext is the complete episode and the second video is the most memorable scene.

You played the first gay character with AIDS on a primetime TV show in the 1987 Designing Women episode “Killing All the Right People.” What do you recall about that experience?
I played a young guy who hires the women to design his funeral. It was a really great part for a guest star, and I was just getting started as an actor, so I was excited. [Designing Women creator] Linda Bloodworth-Thomason, who wrote the episode, had lost her mother to AIDS from a blood transfusion, so it felt special and important and necessary. I knew it was groundbreaking, and I felt privileged to play the part. But I was so young, so I don’t think I was really aware of the impact that it would have for people.

I remember how it felt to see a young gay man on TV, before I even had the language for it. Did you hear from many gay men about the episode?
Yes, but not really until years later. It surprised me. I did a show on Broadway about 10 years ago, and one of the dressers, a middle-aged guy, said, “Tony, I have to thank you for that episode of Designing Women you did. You have no idea what that meant to our community.” All I did was my job, so I didn’t feel like I deserved any accolades, but I was very moved.

Did you have hesitations about taking a gay role so early in your career?
Well, there was so much homophobia in Hollywood at the time. As a straight actor playing a gay character, I had people telling me there would be a stigma attached to it, and I remember thinking how absurd and offensive that was.

Your management?
My management was supportive of it, actually. But there were other people around me discussing that it was an issue, worrying that it was a risk. My dear father was worried about it. I was shocked that it was such a concern, but that was the world we lived in.

Those people didn’t get inside your head?
Not so much with Designing Women because I was so grateful to have a job. But then in 1990 I did a play in New York, The Sum of Us, and I dealt with people saying, “Are you sure you want to play another gay character?” I was 29, my movie career was taking off, Ghost was in movie theaters, so it was something I had to confront. I was militant about it, like, Screw it! If I’m going to take a hit because of this, I’ll take it. I felt that if I avoided risks for that kind of fear, what business did I have calling myself an artist?